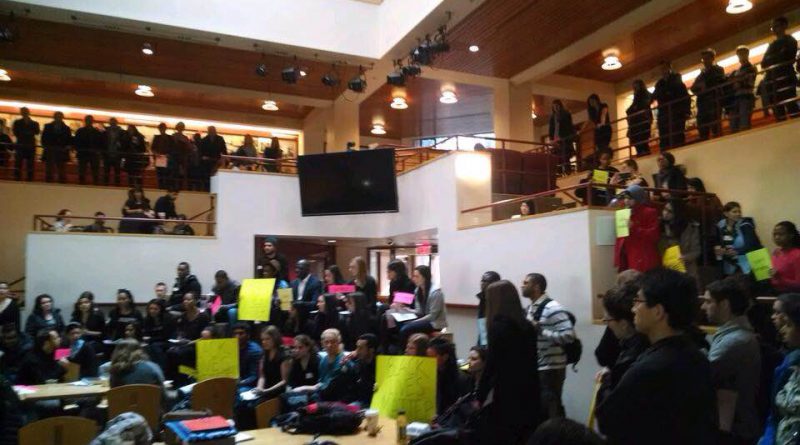 Today activists at the Harvard Kennedy School held a powerful vigil for the tragic and unnecessary deaths of Eric Garner, Michael Brown, Trayvon Martin, and many of the other young black men who have lost their lives due to systemic injustices and racism that plague our society. This vigil took place in the Kennedy School forum, a large open space clearly constructed to facilitate the kind of dialogue and activism I witnessed and participated in today.

Also today in the forum, the LGBTQ Policy Journal had set up a table adorned with rainbow accoutrement where our Editorial Board solicited pre-orders for our 2015 print journal. Many of our Editorial Board members were core leaders and participants in today’s vigil. Similarly, many of the vigil’s organizers are ardent supporters of the LGBTQ movement and the LGBTQ Caucus here on campus.

At today’s event, I was struck in particular seeing the number of individuals wearing a rainbow sticker—a clear (if not a bit outdated) symbol for LGBTQ equality—along with a white striped band on their arm—which symbolized solidarity for the families and communities affected by the racial violence.

The clearest intersectionalities are visible among LGBTQ communities of color—especially today for people who are both LGBTQ and African-American. This community in particular experiences social, economic, and health disparities compared to the general population and their straight black and white LGBTQ counterparts. Families headed by black same-sex couples are more likely to raise their children in poverty, black lesbians are more likely to suffer from chronic diseases, and black LGBTQ youth are more likely to end up homeless and living on the streets.

But beyond the demographic intersectionalities, our broader movements share common characteristics and common goals that should unite us together. Both seek to right the wrongs of injustices committed based solely of immutable characteristics that have no bearing on our character. Both are not a monolithic homogenous movement and can become fragmented within themselves. And both have a shared vision for the country, one in which the color of your skin or the person you love does not dictate your place in society.

Liberty and justice for all is not yet a reality in America – for LGBTQ people, for African-American people, and for a host of marginalized communities throughout the country.

If our movements continue to work in independent silos, we can only achieve so much. Arguably we will never be able to achieve full liberty and full justice if we continue to do so. In fact, we will likely continue to operate in systems and cycles of oppression. Instead, if we recognize our shared and distinct struggles, and then work towards achieving common goals, we will realize multiplicatively beneficial coalitions that will truly transform our country into the beacon of hope and equality it claims to be.

The catalytic activism I saw today and we are all seeing throughout the country can advance not just one community or one cause, but possibly a number of communities and causes spearheading equality for all. But only if we work together can we turn that possibility into a reality.