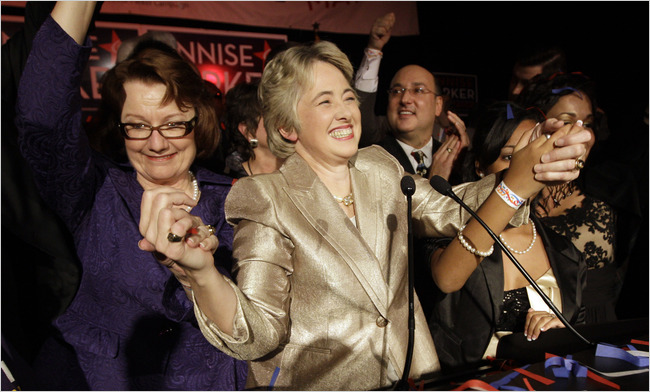 As the chief executive of the country’s fourth largest city, Houston Mayor Annise Parker is arguably the most visible out-LGBT policymaker in the country. Parker sat down with Crosby Burns, the LGBTQ Policy Journal’s Editor-in-Chief, earlier this week to discuss her tenure as mayor, reflect upon her career in public service, and talk about the role her sexual orientation has played (or hasn’t played) in her life in politics and policymaking.

CB: Earlier this week the City Mayors Foundation named you the #1 mayor in the United States and the #7 mayor in the world. To what do you attribute your success? What message do you think that sends to aspiring LGBT policymakers across the country?

AP: I’m blessed to lead a city with a lot of great assets and folks who are working hard to make use and shine. I’m very honored by the acknowledgement, but what I try to do every day is be the best mayor of Houston I can be.

CB: From the perspective of a mayor, what do you think will be the biggest challenge in terms of achieving full equality for LGBT people in the next decade?

AP: It’s the same thing I’ve been working on for more than 30 years as an activist. The more of us who are out and open about our lives, the less we can be denied and marginalized.

While we have achieved a lot of things on the checklist—we are now able to serve in the military, I fully believe we’ll have full marriage in the very near future—many of us can still be discriminated against in our communities. Still, all of those will fall.

Even then we need to turn to the rest of the world. There will be a tendency to say, “Well we’ve done it, we don’t need to worry about it anymore,” when there is still a long ways to go in other parts of the world.

CB: As someone with a wife and four children, you are one of the most visible openly-LGBT politicians in the United States today, and an inspiration to many. When did you come out with your sexual orientation and, more importantly, how did it impact your work as a public servant?

AP: I’ve been out all my adult life. I was out and open in college. I was one of the founders of our LGBT student group out at my university, Rice University. I was arguably the most visibly lesbian activist in Houston in the 1980s. It was always part of my persona.

I didn’t enter politics and then come out. I was a lesbian activist who made the transition into mainstream politics. Partly because I had a full career in the oil and gas industry for 20 years before entering politics, I was working every day to feed my volunteer habit, and now I get to do what I’m passionate about every day.

CB: You’ve served the City Houston as a City Council Member, City Controller, and now as Houston’s chief executive reelected twice over. In your years of public service did you face any backlash from anti-gay groups who opposed your position in government due to your sexual orientation?

CB: How did you handle that?

AP: The funny thing people ask me, “Is it intimidating when people send you hate mail?” and so forth. I was an out lesbian in the 1980s. I had my tires slashed, I had death threats. Nothing that happens in the political arena is anything half as scary as back then.

A few years ago when I became one of the co-chairs within the US Conference of Mayors of the group spearheading equal marriage—“Mayors for the Freedom to Marry”—that was the first time I really had a concentrated attack from right-wing pastors in the Houston area. Somehow I was violating the constitution of Texas because Texas doesn’t allow marriage, and on and on and on and on filling up my inbox.

Oddly enough my straight colleague allies, who were also co-chairs, didn’t get any of that, which is kind of surprising. And of course, there was another onslaught of attacks because Houston last year passed a nondiscrimination ordinance that includes gender identity and sexual orientation.

CB: Congratulations on passing such an important piece of legislation. My last question to you—you said you’re not the lesbian mayor of Houston, you’re the mayor of Houston who just happens to be a lesbian. With that, what is the most enjoyable part of your job?

AP: Shaping the future of my hometown. Mayors do things. Cities have to function 24/7 and big cities have to function at a very high level. I am having to operate at the top of my game all the time. There‘s a new challenge and new issue, there’s always something happening. I get to do things and making decision that will change the face of my city twenty, forty, seventy years into the future.