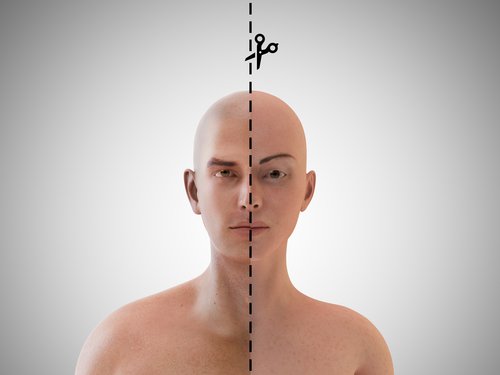 In the opening to her seminal 2003 memoire and manifesto, My Husband Betty: Love, Sex, and Life with a Crossdresser, Helen Boyd describes a scene of a wife dressing up in her husband’s clothes. The wife smells the fabric of his shirt, thinking of him. She admires the way it looks in a full-length mirror. She watches herself buttoning it, before grasping another shirt still on the hanger and then falling onto their bed, relishing the moment.

Boyd notes that this scenario would inspire shock in very few, and, of course, goes on to describe the alternate scenario that very much would – a scene in which the genders are changed, a man admiring and dressing up in women’s clothes. But what if we linger on this first image longer? Boyd correctly suggests that we tend to “give the whole scenario a comfortable meaning,” but what if that meaning is, in fact, incorrect?

Today, unlike in the early twentieth century, women can be seen wearing pants in virtually every part of the United States. Furthermore, the anti-crossdressing laws that allowed for the oppression of queer women and other feminists found wearing fewer than three women’s garments are entirely invalidated or repealed. Nonetheless, a line in the sand still remains about acceptable and unacceptable dress for those assigned female at birth in the US and transmasculine crossdressers, female-assigned-at-birth genderqueers, and trans men all cross that boundary as expressions of their gender identity. Within this group, transmasculine crossdressers are perhaps the least visible.

Unlike their transfeminine counterparts, transmasculine crossdressers do not have a major national social, education, and advocacy organization like Virginia Prince’s Society for the Second Self, Tri-Ess. They do not hold conferences, as such, or maintain as significant a web presence, but when asked to articulate their gender identity in the first four questions of the National Transgender Discrimination Survey (NTDS), 192 female-assigned-at-birth respondents identified themselves strongly as crossdressers, living part of their lives as women and part either as men or crossdressed on a masculine spectrum.

This has called attention to the research gap that “Finding Genders” seeks to fill. This paper seeks to create a foundation for the critical exploration of crossdressing among female-assigned-at-birth people, shedding light on an all too often forgotten group under the transgender umbrella. The paper will examine the demographic patterns of transmasculine crossdressers in the study as well as the patterns of discrimination reported by transmasculine crossdressers in the areas of health and healthcare, housing and homelessness, education, employment, and family life.

Finally, this essay is a call to action for researchers and activists in the ongoing movement to recognize the full range of gender identity/expression in our communities. and research.