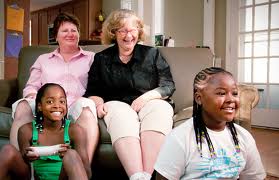 This paper examines and dismantles the body of claims used to exclude LGBTQ individuals from fostering and adopting children. LGBTQ individuals continue to face stigma and discrimination in the United States, including in the child welfare system, which significantly shapes their views of family and society. These experiences of marginality may actually enhance their capacity as adoptive and foster parents. Rejection from families of origin has sometimes led LGBTQ people to establish kinship networks or “families of choice.” This flexible ideological approach to creating family may enhance the flexibility and openness that are trademarks of exceptional adoptive and foster parenting.

This paper argues that LGBTQ individuals’ experiences of marginality ultimately shape their views of family and society. This paper further argues that this may actually serve to enhance their capacity as adoptive and foster parents to children whose lives are frequently characterized by an experience of marginality or pervasive feelings of “otherness.” Additionally, the kinship networks, or “families of choice,” that LGBTQ people frequently forge to buffer the impact of alienation from families of origin, in conjunction with historical legal exclusion from marriage and mainstream discourse around the nuclear heterosexual family, afford these potential parents the flexibility and openness to embrace creative conceptualizations of family that are trademarks of exceptional adoptive and foster parenting.

LGBTQ Parents and the Child Welfare System in the United States

As of 2013, there were nearly 400,000 children in the child welfare system in the United States. Over 100,000 of these children were awaiting permanent placement amidst a scarcity of homes and resources. LGTBQ parents are currently raising an estimated 65,000 adopted children, or 4 percent of the 1.6 million adopted U.S children. Approximately 14,000 children, or 3 percent of all foster children, currently live with LGBTQ parents. Same-sex foster parents are more likely to be families of color than heterosexual married foster parents. LGBTQ parents have also demonstrated a greater willingness than heterosexual parents to adopt children with special needs. These patterns are significant given that both youth of color and youth with special needs are disproportionately represented in the child welfare system and face heightened barriers to permanency as compared to the general population of foster youth. Understanding how youth and families of different backgrounds and orientations (e.g. LGBTQ families) come to interface with the child welfare system is also critical to envisioning collective solutions to broader problems within the system.

Data from the U.S. Census reveals that married heterosexual couples raising their biological children together only comprise about 22 percent of households. This indicates that a “traditional” conceptualization or standard of the American family characterized by a mother, father, and their progeny is largely nonexistent. The persistence of this ideal stigmatizes both children with an LGBTQ parent and children in other family configurations that fall outside the nuclear married heterosexual family model. Same-sex romantic and sexual relationships very rarely result in children who are genetically connected to multiple biological parents in a romantic or sexual relationship with each other. Therefore, understanding LGBTQ parents’ motivation for becoming parents and experiences of creating families requires a more expansive understanding of family then current policy and ideology generally afford.

In contemporary U.S. Society the white male-headed, heterosexually-grounded nuclear family is held as the gold standard in models of union and family. Therefore, it is not surprising that LGBTQ people have been pushed to the margins within public policy. This loss of status and privilege within notions of family and romantic union, in conjunction with not uncommon estrangement, fracture, or distance from families of origin, has resulted in the establishment of kinship networks or families of choice among many LGBTQ people. Historically, society has long valued kinship, or extended family networks, as viable family structures outside of Western dominant cultural norms. The reification of nuclear family structures grounded in genetic connection has resulted in the marginalization of many families whose configuration is non-nuclear or non-genetic. In addition to LGBTQ families, these families include single headed households, cohabiting non-married couples, multigenerational households and various other kinship arrangements that fall outside of Eurocentric and heterosexual norms.