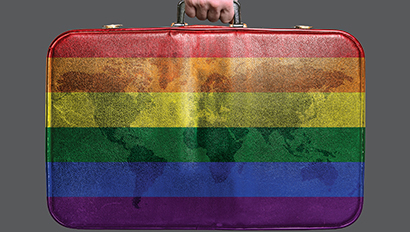 Based on survey results from over 40,000 respondents, Out Now Marketing estimated the 2013 international LGBT travel market size at over $180 billion. This article provides anecdotal evidence supporting the claim that active engagement with LGBT travellers generates economic benefits for both public and private entities. This article further highlights three particular insights drawn from these interviews that are relevant to policymakers: (1) Economic justifications have created space to integrate LGBT perspectives into the tourism industry; (2) Efforts to reach out to LGBT travellers have spearheaded work to make destinations more LGBT friendly; and (3) The public sector plays a significant role in developing LGBT travel markets. In order to sketch out these three ideas more vividly, this article shares the experiences of Mya Reyes, Chad Intrachooto, and Ylan Chrem. Further research in this arena should focus on how the public sector engages with the LGBT travel industry, and how the LGBT travel industry shapes public policy.

Mya Reyes, Chad Intrachooto, and Ylan Chrem’s (see the fully article) stories elucidate the dynamics behind how private companies and public governments have successfully engaged with LGBT travellers. Their experiences also highlight three critical insights into the LGBT tourism industry that reflected the understandings of many of the other 13 interviewees from this study, and that are particularly relevant for questions concerning public policy.

First, the tourism industry’s focus on the bottom line has created spaces for LGBT perspectives to be pulled into the tourism industry. The 13 interviewees of this study generally agree that high returns on investment are the fundamental priority of decision-makers in the travel industry. Both public bureaus like the TAT and private companies like Lima Tours continue to target outreach to LGBT travellers because they have found that their LGBT marketing yields positive economic benefits.

As a result of these economic benefits, the tourism global tourism industry itself has become more LGBT friendly over the years. In the Lima Tours, for example, we also see how the goal of gaining economic benefits from LGBT travellers in Peru prompted the private sector to fill gaps in public services for LGBT people. Chrem explains that Lima Tours not only ran diversity-training workshops for hotel staff throughout Peru, bus also convinced many hotels to implement non-discrimination policies for their staff before the government passed any anti-discrimination laws in employment for LGBT people.

Second, efforts to reach out to LGBT travellers have in turn spurned some cultural shifts by making certain destinations more LGBT friendly. According to Ed Salvato, the editor-in-chief of Man About World, the creation of the magazine Out and About in 1992 was a “game changer,” as it began to rate the gay travel industry through editorials rather than just take advertisements from hotels that pasted a rainbow flag next to their name. Salvato explains that after Out and About, LGBT travel magazines increasingly pressured travel destinations to actually follow through with their claims of being LGBT-friendly. Knowing that they could not lie about their destinations as LGBT friendly, Reyes, Intrachooto, and Chrem have each conducted diversity-trainings for hotel staff and other venues.

Interestingly, the Thai government began funding LGBT marketing for the TAT in 2010 before passing any LGBT hate crime or LGBT civil rights laws. Though there are certainly multitudes of factors involved with public policy decisions, this chronology suggests that pulling LGBT perspectives into Thai public policy was spurred on by the power of the pink dollar.

Third, the LGBT travel industry has benefited significantly from public sector engagement. As we see with the LVCVA and the TAT, public tourism bureaus have taken on important roles in creating some of today’s top LGBT travel destinations. Other notable public tourism bureaus that have successfully expanded new LGBT travel markets include the Greater Fort Lauderdale Convention and Visitors Bureau and Tourisme Montreal. Though the Lima Tours example shows us that government partnerships are not a prerequisite to expanding LGBT travel markets, Chrem’s experiences suggest that an earlier partnership with the Peruvian government could have greatly increased the number of LGBT tourists in Peru today.

A Call for Further Research

The anecdotal evidence provided here suggests that the tourism industry’s engagement with LGBT consumers has generated economic benefits for both public tourism bureaus and private companies. With LGBT international human rights concerns in Russia, Uganda, and elsewhere, however, this discussion about LGBT international travel suggests a number of important directions for future research. Descriptively, what are the dynamics behind the intertwined relationships between private companies and public tourism bureaus in the LGBT travel industry? More generally, how does this profit-driven engagement with LGBT customers shape public policy? Prescriptively, how do LGBT activists leverage the power of the pink travel dollar to advocate for LGBT rights and protections at local, national, and international levels of government? Answering these questions will help policymakers leverage the power of the pink dollar to forward LGBT rights internationally.