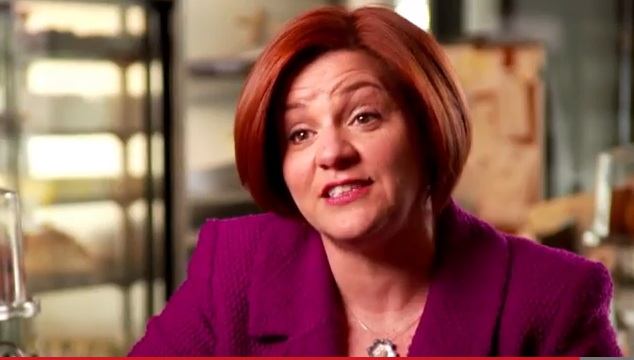 Christine Quinn was the first woman and first openly gay person elected Speaker of the New York City Council. Quinn is spending the semester as a fellow at the Harvard Institute of Politics where she is leading a study group on being ‘a first’ in politics. She is on the board of Athlete Ally, a nonprofit committed to ending homophobia in sports and educating athletic communities of discrimination against LGBT communities.

Quinn discussed the ongoing issues in the gay rights movement, the upcoming presidential election and disillusionment among some allies.

ES: During Super Bowl XLIX, which was in Arizona this year, you sent out a couple of tweets that got quite a bit of national attention. The tweets said:

‘If @katyperry kissed a girl and liked it in AZ she could be fired. Change that @AthleteAlly pledge #SuperBowl2015. We need antiLGBT discrim laws.’

‘AZ #SuperBowlXLIX has no state LGBT protection. LGBT athletes/others can be fired for who they are. Join @AthleteAlly & fight 4 LGBT laws.’

Why did you feel the need to bring attention to this issue?

CQ: I am an enormous personal beneficiary of and very excited about marriage progress. And I’m indebted to the folks who continue that work. But I worry that with the progress we’ve made around marriage that we’re going to get ourselves into a state of happiness or gratitude that is going to lull us into a false state of security.

ES: What do you mean exactly?

CQ: There’s been a lot of great progress and that’s amazing, but the reality is in the majority of the states in the union, and in the country at the federal level, there are no employment protections for LGBT people. So literally, it’s not being hyperbolic to say that someone could get married on a Saturday and go to work two weeks later after their honeymoon and be fired exclusively for getting married and going on a honeymoon. And Arizona is one of those states.

I want us all as Americans to remember that and to re-double our efforts to fully win marriage equality and to be mindful of the other issues that exist – like homeless and runaway LGBT youth and the continued impact of HIV in our community and particularly people of color, straight and LGBT.

ES: Why do you think these issues aren’t more prominent?

CQ: Sometimes I worry that people who live in a place that has had LGBT protections for a while don’t know with all the positive press about marriage equality what the reality is for their fellow Americans. Sometimes with people, if it’s not your issue, you don’t know about it. And people as human beings sometimes want to feel like they can cross certain issues, like marriage equality, off and think ‘Did that! The world is now a better place.’

I hate to be a Debbie Downer, but we’re just not there yet. And even when you have the laws there, for so many, the laws are just a start.

ES: Why do you think it’s so important for people who are not LGBT to be active in issues likes ending employment discrimination against gay people?

CQ: If you look back in history, there has been no successful equality or civil righs movement without a critical level of support form the ally community. It’s just a fact. And in the end, that will continue to be the same case with the LGBT community. I think it will be harder for elected officials to victimize and alienate the LGBT community when they realize they are going to be held accountable buy more than gay people, but by their friends, family, employers and others connected to them.

ES: Many assume that marriage equality and subsequent pro-LGBT legislation are inevitable. What are your thoughts on that?

CQ: The majority of Americans support marriage equality and ending discrimination against LGBT communities, but there’s a vocal minority that doesn’t that controls a great deal of politics. And when someone like Ben Carson says things like ‘Homosexuality is a choice,’ they believe it will resonate with a subset of voters that will translate for them. And that’s terrifying.

ES: If the country is becoming increasingly accepting of LGBT communities, why do you think that someone who says ‘homosexuality is a choice’ has  a chance at being our next president?

CQ: There’s still a segment of the population that says ‘This person is not good on the social issues, but he’s good on the economic issues and what I really care about is my taxes although I don’t discriminate against the gays personally.’ And we continue to see Right Wing elected officials continue to use the LGBT community as a wedge issue that has effects on violence that gets perpetuated against gay people. Make no mistake about it, it is all connected. And one of the things I really hope that voters hold elected officials accountable for is the really dangerous effect of their rhetoric whether it’s on the LGBT community, immigrants or people who are perceived to be immigrants.