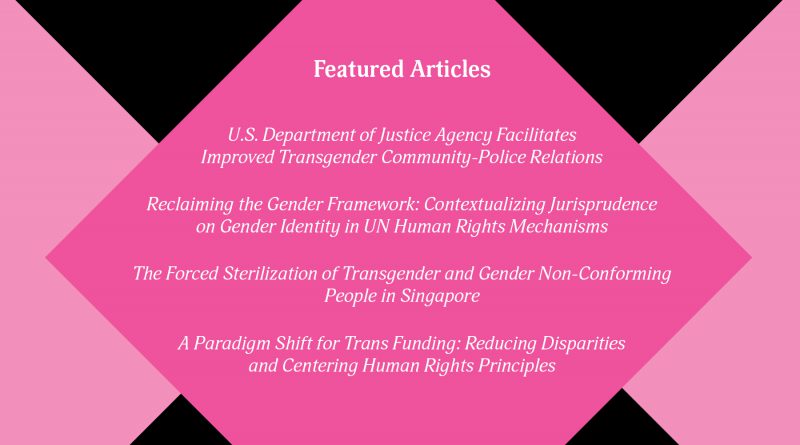 After nine months of hard work, the editorial team is proud to announce that the 2016 LGBTQ Policy Journal, Trans* Rights:  The Time is Now, has been released! The Letter from the Editors-in-Chief is available below highlighting the exciting articles featured this year–purchase your copy now!

Continue to follow our blog for the 2017 print journal Call for Submissions to be released this fall. Thank you for your support!

LETTER FROM THE EDITORS-IN-CHIEF

In August 1966, trans women, drag queens, and sex workers rioted against police violence and anti-transgender discrimination at the Compton Cafeteria in San Francisco’s Tenderloin District. Three years later, in Greenwich Village in New York City, the same forces of police brutality, legalized transphobia, and violent homophobia triggered days of protests, later known as the Stonewall Uprising. This was the beginning of the national movement for LGBTQ rights.

Throughout the world, trans* and gender-non-conforming communities have been at the forefront of movements to end oppression based on gender and sexuality. And while progress has been slow in the fifty years since the Compton Cafeteria riots, recent times have brought hard-won victories. The Equal Employment Opportunity Commission ruled the prohibition of discrimination based on sex in Title VII of the 1964 Civil Rights Act includes trans* people. The Department of Health and Human Services overturned an outdated policy and now allows Medicare to cover sex reassignment surgery. Laverne Cox became the first transgender person to be featured on the cover of Time magazine and nominated for an Emmy. In Nepal, Malta, Australia, and New Zealand, a third gender category is permitted on official documents, such as passports. Thailand opened the first trans* health and support center in Asia. In South America, Michelle Suárez Bértora and Tamara Adrián became the first openly transgender women to be elected to national legislatures, in Uruguay and Venezuela, respectively.

And yet, despite these gains, trans* people and trans* issues continue to be marginalized in virtually every society in the world. According to a study by the US National LGBT Task Force and National Center for Transgender Equality, one in four trans* people has been subjected to transphobic violence. Individuals with multiple marginalized identities—low-income transgender women of color, for example—face the highest rates of assault, both in the United States and abroad. In Brazil, there were forty-eight reported murders of transwomen in January 2016 alone. Transgender individuals are twice as likely to be unemployed and four times as likely to be living in extreme poverty in the United States. This trend holds in Europe as well, where the Fundamental Rights Agency found that trans* individuals are substantially less likely to be in paid employment compared to cisgender peers. Recent reports from Black and Pink and Human Rights Watch describe the abysmal situation for trans* incarcerated people and gender-non-conforming individuals in detention centers in America. States such as Malaysia, Kuwait, Nigeria, and others enforce laws that criminalize “posing” as the “opposite” gender.

This is the reality for trans* people: hard-won victories are juxtaposed with daunting challenges. The LGBTQ Policy Journal at the John F. Kennedy School of Government at Harvard University chose to focus on trans* policy this year, in an effort to further the discussion about the roles policymakers—at all levels of society and in all sectors—can play in impacting trans* lives for the better. This year’s journal features eight phenomenal articles covering a range of topics.

Sheherezade Kara assesses human rights mechanisms at the United Nations, and the degree to which these mechanisms, and frameworks such as “gender-based violence,” adequately include and protect trans* rights. Enrique Restoy takes us to the local level, examining the ways that transwomen community-based organizations in Honduras are appropriating international human rights norms for empowerment and to defend their rights.

Considering the recent refugee crisis sweeping Europe, Jennifer S. Rosenberg urges for policies that reflect the unique needs of trans* people, distinct from a broad LGBTI approach. The necessity of trans*-specific policy design is echoed in Evelyn Deshane’s article, which discusses the ways transgender men and non-binary people treated for eating disorders are impacted by gendered language and misunderstandings about trans* identities.

Kit Chalberg and Kelly Collins-McMurry offer an analysis of strategies being tested at the Community Relations Service Agency in the US Department of Justice to improve the relationship between the trans* community and police.

Finally, Masen Davis, Sarah Gunther, Dave Scamell, and Mauro Cabral describe the contemporary landscape of funding for trans* organizing, and argue that a “paradigm shift” in philanthropy is necessary to sustain the movement.

These articles present some of the challenges and opportunities that exist in crafting trans*-inclusive policies. At the same time, the issues explored here comprise only a subset of the trans* community’s policy needs. To name but a few areas for future research, more resources and energy must be directed at developing strategies to end the criminalization and incarceration of trans* individuals; to eradicate the epidemic of violence against trans* people; to prevent negative outcomes in schools settings—from bullying to discriminatory and outdated school curriculum; to overcome challenges to inclusion and equity in the workplace, housing, and social services; and more.

Thank you for reading these articles and supporting research for one of the most marginalized communities in the world. In light of the victories for sexual orientation and marriage equality in 2015, we believe that the LGBTQ community must educate ourselves and educate each other about the urgency facing the trans* community. The next fifty years must advance rights for trans* people with greater expediency.

Trans* rights: the time is now.

Support LGBTQ policy scholarship and analysis by purchasing a copy of the 2016 LGBTQ Policy Journal at the Harvard Kennedy School, Trans* Rights:  The Time is Now.