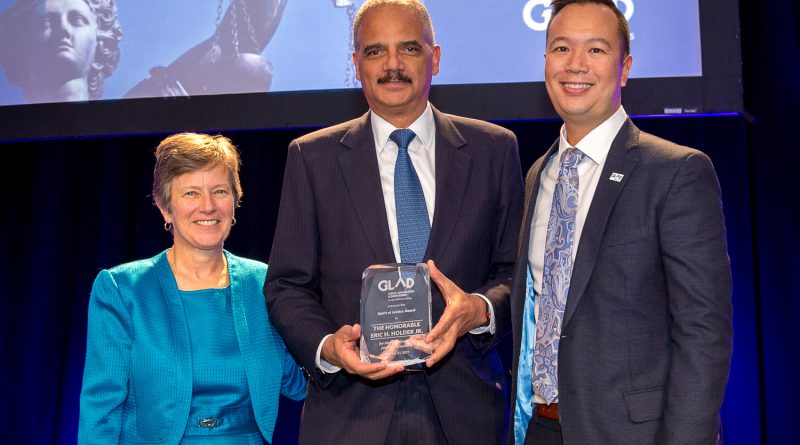 What’s that, you say? A social-justice event that is like the Grammy’s for the music industry, but for die-hard civil justice fans who love the gays! And I get to attend? Lead the way.

Friday, October 27 was the 18th Annual GLAD Spirit of Justice Award Dinner. What. A. Night! As I mingled with over 1100 GLAD (GLBTQ Advocates and Defenders’) supporters, I couldn’t help but be swept up in the excitement of being in the room with some of the most influential GLBTQ activists and supporters in the US. Political heavyweights were also in attendance, including Massachusetts Attorney-General Maura Healey, House Representative Byron Rushing, the honoree of the evening, the Hon Eric Holder Jr (US Attorney-General from 2009-2015), and even Barack Obama made an appearance!*

Mary Bonauto (GLAD Civil Rights Project Director) took the stage to a standing ovation. If you haven’t heard of Mary, allow me to provide a snapshot of her career: she was lead counsel in Goodridge v. Department of Public Health, which made Massachusetts the first state in the country where same-sex couples could legally marry. In 2015, she successfully argued before the U.S. Supreme Court in the historic case Obergefell v. Hodges, which established the freedom for same-sex couples to marry nationwide. Needless to say, I was unashamedly star-struck. (Later in the night Mary gave me a high-five, and my reaction was pretty much this). Mary gave us an overview of GLAD’s current cases. We heard about efforts to stop conversion therapy in New England, the need to continually defend equal marriage rights in the South, and the fight to stop President Trump’s ban on transgender people serving in the military.

An important part of the Spirit of Justice Award Dinner is celebrating the plaintiffs of GLAD’s strategic litigation cases. These are the people who have suffered because of their GLBTQ status, who were brave enough to stand up for their rights through a grueling legal battle, and who have changed laws for the benefit of us all. They have gone through truly stressful experiences, and it was an honor to be able to thank them. One such brave soul was seated right next to me: Karen Partanen, who was the plaintiff in the groundbreaking Massachusetts case of Partanen v Gallagher, which allowed the non-biological parent of a child born to an unmarried same-sex couple to establish themselves as their child’s presumptive parent. We were lucky to hear from one of the plaintiffs in the current lawsuit challenging President Trump’s discriminatory transgender military ban. Young Dylan Kohere took the stage to tell us how the ban had affected his life. By the end of his speech, there was not a dry eye in the room. I hope he could feel that everyone was cheering him on, because we certainly were.

Finally, the moment came to honor the Hon Eric Holder Jr for his work in defending the civil rights of all Americans as Attorney-General. And as if the night couldn’t get any more rock-and-roll (for civil justice fans, that is), introducing the former A-G was none other than his old boss and buddy, Barack Obama!* Beyonce herself would not have gotten a bigger applause!**

Eric Holder spoke about the achievements of the GLBTQ movement so far, but reminded us that there is a lot more work to be done. He warned us to be vigilant against those who seek to undermine civil rights progress, and called upon the GLBTQ community to make common cause with the issues affecting other disparate communities, such as communities of color. Finally, he reminded us to take heart, because our cause is just and consistent with the founding ideals of this nation.

The GLAD Spirit of Justice Award Dinner was a truly inspirational evening. I left feeling energized and rejuvenated to keep on making the music!*** See you there next year!

* Obama appeared by pre-recorded video, not in person. Imagine that Beyonce can’t make the Grammy’s and she records a message from home with Blue Ivy on her lap. It was just like that.

*** “making the music” is a metaphor for ORGANISING and RESISTING.