Home > Interviews > Non-Binary Actors and the Theatre Industry: An Interview with Kevin Kantor 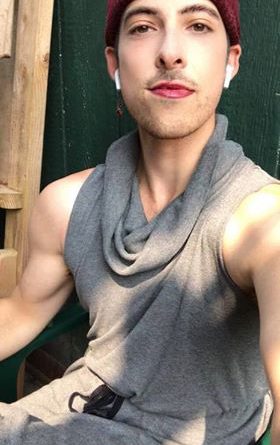 Kevin Kantor (they/them) is a genderqueer non-binary director, actor, and performance poet working to challenge, deconstruct, and reimagine traditional semiotics of gender on stage and in performance. They are currently in rehearsals at the Milwaukee Repertory Theatre, where they are originating the role of Mia in the American Premiere of Things I Know To Be True by Andrew Bovell. As a poet, Kevin’s writing, which explores topics related to queerness, gender identity, rape culture, and survivorship, has been featured in Button Poetry, Teen Vogue, Mic.com, and the Huffington Post, with over 17 million collective online views, and in the anthology We Believe You: Survivors of Campus Sexual Assault Speak Out (Holt Paperback). They can be found on social media at: @Kevin_Kantor.

WOODZICK: Kevin Kantor, I know you as an actor, activist, and poet. When you meet someone new, how do you introduce yourself?

KANTOR: I start usually with, “Hello, I’m Kevin, pronouns they, them,” and go from there. A mentor of mine, Ken Arkind, a poet from Denver, Colorado, has always said that we gift one another with our names. I’ve carried that sentiment with me for a long time. Usually, when I meet someone new, I’ve borrowed Ken’s phrasing, “Gift me with your name?” And, yes, I am an actor, a director, theatre artist, and spoken-word poet. There’s been an emerging trend, I believe across the board, to celebrate interdisciplinary artists—the optimist in me thinking of how that skill set lends itself to collaboration, the cynic thinking of how that diversified skill set has become a necessity to survive in the market.

I first met you when you were presenting at the Statera Conference [a national arts and theatre conference for women and non-binary people] about breaking binaries in the theatre industry. What was the motivation for giving that presentation?

I’ve admired the work that Statera has been catalyzing—and those involved in the [Statera] foundation’s genesis, Melinda Pfundstein, Shelly Gaza, and others. I was excited by the opportunity to help bring their mission into the next step of actualization, that mission being gender equity in theatre arts. That’s a difficult (read: impossible) goal to work toward without TGNC (transgender and gender nonconforming) voices in the room. In a broader sense, I’m interested in having these necessary discussions whenever possible. There’s been an overdue increase in dialogue surrounding how to better serve TGNC artists in the community, but I’ve found a lot of organizations only really paying lip service to the issue or not really implementing actionable steps to make their spaces more inviting, inclusive, and even basically accommodating of trans folk. So, this first presentation was a little bit of trans literacy 101, hopefully something that will spur and catalyze action.

What would you most want to say to cisgender casting professionals? [“Cisgender” refers to someone who doesn’t identify as transgender, sometimes referred to as “cis.”]

First and foremost, trans folx should be playing trans roles. Full stop. There are countless reasons for this, but ultimately, for me, it comes down to the intersection of opportunity and representation. There are so few roles, proportionately, being written for trans actors, and when institutions intend on programming queer and trans narratives, those communities should be the ones profiting from that work (you’d think, obviously). Also, TGNC representation extends beyond merely the ways in which our exposure manifests onstage. Programming trans work is an opportunity to invite valuable insight to your institution and community at large that can only really be achieved when you actually hire trans artists—so stop with the cis-washing. Cisgender heterosexual actors are too often afforded the privilege of being seen as Swiss Army knives of versatility, with their cis-ness and straightness functioning as a blank canvas, whereas trans actors’ identities are somehow a hurdle to overcome. Casting directors, theatre artists, and cis creators of all kinds have a responsibility to challenge their understanding of the semiotics of gender onstage and in performance; too often dominant practices serve the binary out of sheer laziness, unexamined tropes, and misguided gender essentialism. Moreover, program more trans work! I think one of the greatest challenges I’ve faced with cis casting professionals is the limited scope (if any) with which they view TGNC identities. There’s a troubling narrowness in their understanding, which often excludes trans non-binary, genderqueer, and gender-nonconforming folx. I believe if there was a stronger onus to produce the work of TGNC playwrights, the industry would come to realize the vast breadth of the trans experience that they’ve yet to really embrace or explore.

In their article “Don’t Call Me Ma’am: On the Politics of Trans Casting,” (written for HowlRound) playwright M.J. Kaufman shares that in their research, most casting directors give two excuses for not casting trans actors: (1) they can’t find the, or (2) they’re not well trained or versatile enough for repertory casting. How do you respond to that?

It might seem curt to say, but it’s just lazy. It’s irresponsible. And flatly untrue. There are online networks of TGNC theatre makers with nearly a thousand members. We are here, and we are capable. And still, even if their second point were true, I’d challenge them as to why they aren’t trying to actively remedy these so-called problems. Why aren’t training programs prioritizing TGNC recruitment? Why isn’t the canon or repertory programming versatile enough to provide opportunities to TGNC artists instead of the other way around? Again, here my notion about the assumed versatility afforded of cishet (cisgender and heterosexual) actors can be applied. The notion that TGNC actors’ identities somehow pigeonhole them or make them incapable or less equipped of playing traditional cisgender roles is just ludicrous. It’s the equivalent of reducing an entire human being’s body of work and storytelling ability to their gender, which is something that we just don’t do to cis people. So . . . stop.

How do you handle misgendering in the rehearsal room or other professional settings?

I think navigating being misgendered is very personal for each individual, but I can speak to what I usually tell a new group of collaborators. Firstly, they should be doing their own homework around pronouns (we all should be). (1) I’m not a walking encyclopedia, (2) I can’t speak of all TGNC folx, and (3) I’m at work, not leading a trans literacy 101 course. People will mess up. I have patience for it—some days less, some days more. The question I get most though is, “What should I do if I accidentally misgender you?” Again, speaking from personal preference, my response is, first, if you catch yourself, correct yourself in the moment and move on. If I hear you misgender me, I might not (and probably won’t in the middle of a workday on the go) have the emotional bandwidth to correct you in the moment; I don’t have the time, the room doesn’t have the time, the project I’m working on doesn’t have the time for me to stop to correct a collaborator (who already knows I’m non-binary, mind you) every time they misgender me. That being said, if I do go out of my way to correct you, to make the time, to gift you with the gentle reminder of my existence, please do not say “sorry.” Say “thank you.” And mean it. And remember. And move on.

The recent Actors Equity strike has come to a close with an agreement that ensemble members who participate in the workshop process of new musical theatre works will share 1 percent of the profits generated from the show, up to ten years after it opens. Do you think that actors in the TGNC community who participate in the development of transgender characters should receive a similar financial agreement built into their contracts?

I’m going to answer around this question a bit. Too often, when a TGNC actor is the only non-cis individual working on a project, they’ll inevitably end up doing sort of off-the-record consultation work on their lived experience or with regards to the role they’re playing in addition to whatever work they were actually hired to do. It’s unpaid labor. It happens all the time. So, yes, cis-dominated spaces should be building consulting fees into their budgets. And it’s worth it. And necessary.

The manuscript is something of a love letter to the theatre, though one that recognizes how much love can hurt—that often, the ones love you most have the capacity to cut you deepest. In many ways, I discovered my transness through my work as a theatre artist and a storyteller. Yet, like so many cultural institutions, it’s still beholden to many cisnormative practices and still, too often, reduces queer folx to their trauma. Please Come Off Book is my way of fighting for what I love—the theatre—while also fighting for myself. Titular poem:

some days i call for my gender

everyone else showed up

to the first rehearsal off-book.

What are the most meaningful actions that cisgender allies can take to be in support of the TGNC community, personally, professionally, and artistically?

Firstly, educate yourself. It feels hackneyed to still be saying this, but we are: marginalized communities shouldn’t bear the responsibility of educating others on their own marginalization. Once you’ve done your research, pass the mic. Share your resources. Provide a platform. I am tired of presenting cases for the worthiness of TGNC work when I just want to be presenting the work. Work to unlearn your internalized prejudices and assumptions surrounding gender and consider TGNC artists for all sorts of work and roles. We’re available, capable, and we have so much to offer—talents and stories that extend beyond our gender identities and presentations.

What are you working on now? Where can folx find you if they want more information about your work?

I am currently in rehearsal at The Milwaukee Repertory Theatre for the American Premiere of Andrew Bovell’s Things I Know To Be True while also working on my poetry manuscript, Please Come Off Book. I am also currently booking college and university spoken-word poetry engagements. My booking contact is KevinKantorBooking@gmail.com.

Woodzick is an actor, director, producer, and PhD student in theatre and performance studies at the University of Colorado, Boulder. They hold an MFA in contemporary performance from Naropa University. This past fall, they performed in the Denver Center for the Performing Arts Off-Center production of Bite-Size: An Evening of MicroTheatre as the Veterinary Assistant and the bear. Woodzick is the founder of The Non-Binary Monologues Project. They are currently directing Into the Woods Jr at Southern Hills Middle School and will be reprising the role of Laertes in Nirvamlet 2.0 this summer in Denver with Band of Toughs. Learn more about them at www.woodzick.com.